How Facebook does open source at scale - James Pearce (Room 212)

Open source has always been a huge part of Facebook's engineering philosophy. The company uses, maintains, and contributes to a significant number of major projects, in areas as diverse as native mobile tools, big data systems, client-side web libraries, back-end runtimes and infrastructure, and, through the Open Compute Project, server and storage hardware.

Many of Facebook's open source contributions are technologies that meet its unique scale and performance challenges.. In this session, we’ll look at examples of how Facebook supports existing projects, develops alternatives, or even pioneers new capabilities to do so—and then, of course, how it shares those improvements back to the community.

With hundreds of projects, thousands of engineers, and tens of thousands of participants, how does Facebook manage the open source portfolio itself, at scale? To answer that, we’ll also look at the way open source is woven into the company's engineering workflow and culture, and how tooling and instrumentation allows it to stay open, stay responsible, and yet still move fast. 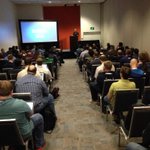