Up: Adrian Cockcroft: "Velocity and Volume (Or Speed Wins) @adrianco

Up: Jeff Patton, "I Won't Be Fooled Again: How orgs have evolved to value learning over self-deception" @jeffpatton

Up: Randy Shoup, CTO Kixeye: "Presentation: "The Virtuous Cycle of Velocity: What I Learned About Going Fast at eBay & Google"

Presentation: "The Virtuous Cycle of Velocity: What I Learned About Going Fast at eBay and Google"
Time: Friday 12:00 - 12:30 / Location: Robertson 1
eBay and Google operate some of the largest Internet sites on the planet, and each maintains its leadership through continuous innovation in infrastructure and products. While substantially different in their detailed approaches, both organizations sustain their feature velocity through a combination of technology, people, and process. This session will explore how these large-scale sites do it, and will offer some concrete suggestions on how other organizations -- both large and small -- can do the same.
RANDY SHOUP,
CHIEF TECHNOLOGY OFFICER AT KIXEYE

Time: Friday 13:30 - 14:00 / Location: Robertson 1
This talk is about the role CORE (Cloud Operations and Reliability Engineering) plays at Netflix and its support of Netflix's core software delivery goals (largely focused on maximizing speed of innovation).
In most organizations, groups like CORE end up playing either a gatekeeping role to changes in production (slowing down innovation and being in conflict with continuous delivery approaches) or a manual, runbook-oriented approach to problem solving (which externalizes the costs of, for example, not having an automated deployment pipeline, not to mention the risk of rolling out changes of insufficient quality). At Netflix, CORE's role is as a high-value enabling group focusing on making developers faster and both minimizing and resolving production outages.

Up: John Simone, Heroku: "Designing Continuous Delivery Into Your Platform"

Some other awesome talk: Lane's track

@lisacrispin: RT @dominicad: #flowconsf has the distinction of 1st tech conference where I could run into ppl I needed to talk to in the ladies room.

@ccourage
* .@ccourage: "
* @moshjeier: This is definitely a trend during #flowconsf "Walk a mile in their shoes." Customers are why we get paid, let's not forget them.
* .@ccourage: "Since 2011: 47 classes/workshops taught; many locations
* .@ccourage: "Credible: how do we show design impact? here's what consoles looked like: 20y old" 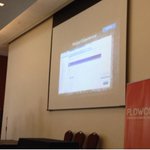 https://pbs.twimg.com/media/BYBXndMCQAAdeat.jpg
* .@ccourage: "
* @filler: Once Citrix employees buy into design principles, value design, they have internal courses to keep up the inertia. @ccourage
* @moshjeier: RT @stack72: You need to be able to demonstrate what your company talks about. Otherwise you loose credibility
* @davemangot: Simple doesn't mean simplistic @ccourage
* .@ccourage: "Experimenting; now we don't start w/solution in mind; instead, rapid prototype, storytelling, experiments
* @stack72: This talk really demonstrates that Citrix are trying to find their WHY. They are making sure their employees are buying into it
* .@ccourage: Awesome. "Iterate iterate iterate iterate... UNTIL AWESOME. It'll be ok. :)" 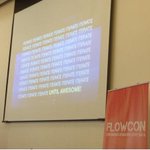 https://pbs.twimg.com/media/BYBYaO9CEAE3691.jpg
* .@ccourage: "Michael Jordan: I've missed 9000 shots; I've lost 300 games; 26 times, I was trusted to take winning shot & missed
* .@ccourage: "[For creative work], I hate cubicles & boardroom tbls; I never want to see one again; I want to see collaboration"
* @moshjeier: Call out the people that go above and beyond for their customers. "Design Heroes" @ccourage
* @stack72: RT @moshjeier: Get people out of cubicles and board rooms. Get people out into the open, make the collaboration visible.
* .@ccourage: "I need to show execs, ppl at top the value of design culture, using their language & culture (eg: ROI, visuals)
* .@ccourage: "Never wait to be told to something; if it can impact customers, just dig in & do it; ask for forgiveness later
* @chemphill: citrix circa 2010: we have a design team? great, I need an icon @ccourage
* @mblongii: The most common form of entropy in an organization is apathy about the mission.
* @filler: Regarding detractors and pessimists, "You will only be as good as the team you have around you." @ccourage
* Love it; execs think customer case studies are the success stories you post on website; instead, I'm bringing stories about how Sue hates our product

Up: Linda Rising, "Organizational Change Myths and Patterns for Evangelists"

Time: Friday 16:40 - 17:25 / Location: Fisher Room
You have great ideas. You're smart. The people in your organization are smart. Post Hoc, Ergo Propter Hoc -- the rest is easy -- simply make a transition plan and transparently explain the benefits. These are other organizational change myths will be tackled by Linda's talk about patterns for introducing new ideas. She will provide some useful tips for helping you start on Monday morning to grow, step by step, any innovation.